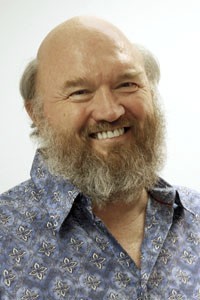 Dr. Veltheim, a native Australian, has been aware of body energy fields since the age of 8 when he took up martial arts and Zen Meditation. At age 13, he began practicing Transcendental Meditation and later taught the philosophy behind martial arts.

John went on to become a licensed doctor of chiropratics as well as a doctor of Chinese medicine, traditional acupuncture and natural therapy. He had no idea that these activities were forming the foundation for remarkable breakthroughs soon to unfold.

His success in chiropractics and Chinese medicine led John to become the academic chairman for the entire chiropractic profession in Australia, as well as becoming the principle director for the College of Chinese Medicine and Natural Therapies in Brisbane. As his reputation spread, his practice grew to the point where long hours with patients caused him to become stressed and overworked. He ended up in a hospital connected to life support systems with very little hope of survival.

John had contracted Epstein Barr virus and his liver was so badly damaged that he was given less than a week to live. He checked himself out of the hospital and went home to practice everything he had ever learned about alternative healing. He was soon up and around, but recognized the need for a drastic change in life-style. He sold his practice and began teaching stress management, philosophy and Reiki around the world. The next few years were spent lecturing, despite a constant high fever and chronic fatique, and he continued to explore every method of alternative healing available.

While in New Zealand, he met Dr. Tracy Livingston, an osteopath and acupuncturist, who was a former student of his. She had been practicing a new technique with patients suffering from viruses and was seeing amazing results. John accepted her offer for treatment and three days later, the Epstein Barr virus and a six-year long high fever was gone.

Dr. Veltheim was given all the information known about this technique and was urged to develop and teach it. The more he explored, practiced and taught the technique, the more the possiblities for refining and expanding were revealed.

Today, John resides in Florida where he has developed an alternative approach to health that has become known as The BodyTalk System. (see International BodyTalk Association) He teaches all over the world and continues to be receptive to the continually evolving and ever deepening applications of this technique.