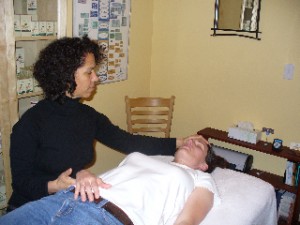 Dr. Laura Washington is a naturopathic physician, and has been integrating BodyTalk into her practice for four years.

How did you hear about BodyTalk?

I was operating my naturopathic practice using a form of muscle testing – NRT (nutritional response testing) for about two years before discovering BodyTalk. However, NRT was missing the depth of connection I wanted to have. I feel my practice is truly about connecting with people, so I was in this open place knowing I wanted to do more. That’s when BodyTalk started showing up.

I had a patient who had been in a couple of car accidents and was having an unbearable time. But, what was helping her most was something she was doing on her own – Access. She had also taken Modules 1 & 2 strictly for self-healing.

Next, a woman at my meditation center mentioned she was practicing BodyTalk. By the third time I heard about it, I was definitely looking for the next step in my practice. I went to a continuing education class on craniosacral therapy and another naturopath told me she was taking the BodyTalk modules the following weekend.

Somehow, I just knew I needed to incorporate BodyTalk into my practice. I had never had a BodyTalk session and had never even seen what one looked like, but I knew it was what I needed. So, I signed up and went to Modules 1 & 2 the next weekend.

What made you decide to incorporate BodyTalk into your naturopathic practice?

I was already doing muscle testing in my practice with NRT, so BodyTalk was a natural extension of it. Right after the training I was able to use the protocol sheet. It was an easy transition to make. It impressed me because I had taken other courses in the past where I was excited about what I was learning, but it didn’t integrate well into my practice. BodyTalk was totally different; it immediately flowed into what I was already doing.

How do you use BodyTalk in your practice?

After learning BodyTalk, I would simply tell my clients, “I’m going to use a different style of muscle testing today.” And then I would start at the top of the BodyTalk protocol chart and if “other modalities” came up we’d use NRT and/or the other modalities I worked with.

What do you enjoy most about practicing BodyTalk?

It’s important for me to connect with people on a deep level and BodyTalk absolutely provides that. It does the same for the client; giving them an opportunity to connect at a deep level with what’s going on inside and to connect to the things that are typically overlooked. People so appreciate this type of connection. It’s both meaningful and valuable.

How has BodyTalk enhanced your naturopathic practice?

BodyTalk provides results, and that’s why I use it. I use the “yes’s” and “no’s” to find the priorities and where to go next. BodyTalk has given me a clear focus on how to go about using other modalities so they can be more effective. It really takes the guess work out of what I do.

How has BodyTalk impacted you personally?

As someone with a meditation and spiritual practice for more than 20 years, I feel like my work is an extension of my spiritual practice. BodyTalk is very much a part of that. I feel I am served by BodyTalk in as many ways as the client. The mental state it requires me to be in promotes my greatest wellbeing, rather than going through life trying to make shifts of that nature happen on my own. There’s no end to it, the work is ongoing and it’s wonderful to be in. You simply can’t get bored, there’s so much to learn. BodyTalk actually facilitates my own personal growth – it’s such a blessing!

BodyTalk Case Study
Four-year-old young male brought in by his mother for chronic constipation and skin rashes. He had lots of anxiety around bowel movements and finds them scary. Mom gives him Miralax daily which softens it enough to pass. In addition, he gets minor skin eruptions all over his body. His father has some similar rashes; it runs in the family. It has been diagnosed by his pediatrician as eczema. They’ve used lots of hydrocortisone, anti-fungal and anti-bacterial creams when he was younger, but they didn’t really help.

Neuromuscular testing reveals a wheat sensitivity (this was one month before I took my first BodyTalk course) so I recommended avoiding wheat and taking a digestive enzyme. On follow-up 6 weeks later there is no change in the rash or dependence on Miralax even though he has avoided wheat (except a few crackers at church).

I decided to try this new stuff I had just learned – BodyTalk. Through it we balanced his body to seasonal allergies (not wheat) with a body chemistry technique where we place a sample of his saliva on his navel. He was very squirmy so it was difficult to do the session. I told him it is no longer necessary to avoid wheat.

Two weeks later on follow-up, his mother reports that the rash has been totally gone since the last treatment. He still needs Miralax for bowel movements. We do another body chemistry session with BodyTalk this time on pollens. Three weeks later – still no rash and now no use of Miralax. His stools are naturally soft and pass easily. It is now several years later and the family has moved out of state. I do hear from the mother from time to time that her son’s symptoms have never returned.